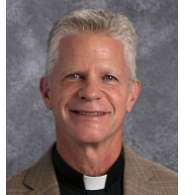 Pastor Golter and his wife, Elizabeth, come to Trinity from Saint Louis, Missouri, where he worked as the Special Assistant to the President of The Lutheran ChurchMissouri Synod. He mainly oversaw two projects: The 500th Anniversary of the Reformation Celebration and the Preach the Word Project. Pastor and Elizabeth originate from two small towns in western Nebraska. He received degrees from the University of Nebraska School of Pharmacy (1978) and Concordia Seminary, St. Louis, Missouri (1984), and has done post-graduate work at Concordia Seminary, St. Louis, and Concordia Theological Seminary, Fort Wayne, Indiana.

Pastor Golter has served three congregations: Trinity, Wheatland, Wyoming (1985-1994); Grace, Albuquerque, New Mexico (1994 - 2001), and Holy Cross, Highlands Ranch, Colorado (2001 - 2003). He was elected as the District President of the Rocky Mountain District in 2003, serving till 2012. From Denver they moved to Saint Louis where he was called to serve as Executive Director of the Office of International Mission (2012 - 2014). He has presented essays at various pastors’ conferences and district conventions, including our own Iowa East District Convention in 2015.

Pastor's and Elizabeth's family consists of son, Jacob (married to Alex) with three delightful grandchildren, and son, Caleb, all living in Denver, Colorado.

Pastor Golter said that it's a distinct privilege to be called to serve the Lord's baptized at Trinity, alongside the pastors and staff. He and Elizabeth are looking forward to this opportunity the Lord has presented. 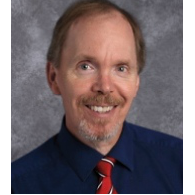 Pastor Vokt is a native of the Hawkeye state, having lived here the majority of his life. Following his graduation from Atlantic High School, Pastor Vokt studied at Concordia University, St. Paul, Minnesota, where in 1980, he earned his Bachelor of Arts degree with a major in Biology and a concentration in Pre-Seminary Studies. After working for a time as an assistant to the Pathologist at Cass Co. Memorial Hospital, he entered Concordia Seminary in St. Louis, Missouri, during which time he also developed his passion for the St. Louis Cardinals. He was one of four students asked to take off the 1982-83 school year to serve the seminary Office of Development in PR, fundraising, and student recruitment. The following year he returned to the seminary and from 1984-1985 was assigned to serve his year of vicarage at Christ the King Lutheran Church in Grosse Pointe Woods, Michigan. It was during that year that he met Jill Evola, and their first date was the third game of the American League playoffs between the Tigers and the Royals. It should also be noted that Pastor Vokt broke a date with Jill to attend the fifth and final game of the 1984 World Series won by the Tigers! Following his final year at seminary, he earned his Masters of Divinity degree in 1986 and was called to Trinity Lutheran Church in Davenport, Iowa. He currently hold the Office of Associate Pastor, but serves as Trinity's interim Senior Pastor, as well.

Pastor Vokt is married to Jill, and their marriage has been blessed by two children, Kristen and Peter. Pastor Vokt enjoys reading, golf, riding his bike on the bike path, watching movies with his family, and leading others into the Word of God. He would tell you that the times of greatest growth in his life have been in the times of greatest adversity and that God’s grace has been sufficient for him and will be for you too. 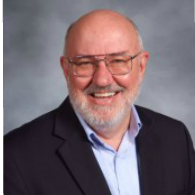 After graduating from Lincoln Northeast High School in 1965, he enlisted in the Air Force. While stationed at Peterson Field (outside Colorado Springs, Colorado), he met and married the former Lois Doerr of St. Louis, Missouri at Immanuel Lutheran Church, Colorado Springs, Colorado on June 17, 1967. After being discharged from the Air Force, Merle completed an Associates Degree in Computer Science at Pikes Peak Community College in Colorado Springs. Then, after moving his family a few times working with computers in hospitals, he completed his undergraduate degree at St. Ambrose University in Davenport, Iowa in December 2001.

Merle and Lois have two daughters, Lori, married to Jeffrey Whalen and Jill, married to Matthew Schmitzer. Both girls are Colorado natives. Collectively the two families have blessed Merle and Lois with four wonderful granddaughters.

Merle and Lois share a love for the St. Louis Cardinals (Lois has three brothers who convinced Merle this would be a good decision) and the mountains of Colorado.